MY TEAM TALKS QUICK START INSTRUCTIONS (OUT OF THE BOX) 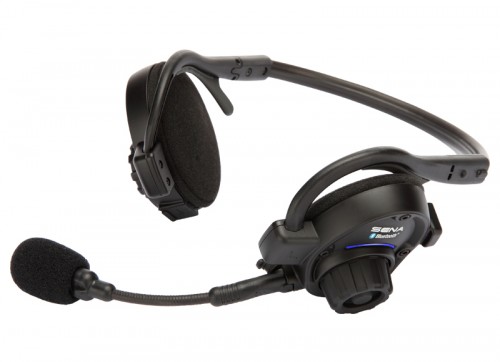 Your Sena SPH10 headsets come with two microphones.  The longer "boom microphone" should be used for most outdoor applications.  Please insert it into the left earpiece making sure it is oriented correctly and pushed in all the way (there is an arrow on the microphone and the headset, make sure to line up these arrows).

Charge each headset.  Put the "L" shaped plug into the rectangular socket on the right earpiece.  Insert the USB plug into an outlet.  When you first plug it in, a RED LED will light up on the LEFT earpiece to let you know it is charging. The headset is fully charged when the LED turns BLUE, which takes about 2.5 hours.

The headset band goes behind your neck and permits you to wear a hat or helmet.  The band and small rubber clip fit between your ear and head, while the foam earpiece should cover your ear.  The left earpiece has a large "L" where the headband attaches to the earpiece.  Likewise, the right earpiece has a large "R" on it.

There are two controls located on the left earpiece;  The multi-function "JOG" dial and the "PHONE" button.  The JOG dial activates the intercom and controls the volume.  The PHONE button enables the Bluetooth phone connection.  Pushing both buttons at the same time turns your headset ON and OFF.

This part will be easier with another person.  Locate the JOG and PHONE buttons, then put the headset on.  Push and hold the JOG and PHONE buttons.  You will hear THREE BEEPS, followed by a voice saying, "Hello."  If you push and hold the two buttons together again, the voice will say, "Goodbye," and your headset turns OFF.  You can adjust the volume by rotating the JOG dial clockwise (loud beep) to make the volume louder or counter-clockwise (soft beep) to lower the volume.

Your headsets can be paired with any other Bluetooth device.  To "pair" with another My Team Talks headset, after turning the second headset ON, push and hold the JOG dial FOR 5 SECONDS.  You will hear a couple of soft BEEPS followed by a voice saying "Intercom Pairing."  Have your partner turn on their headset and then push and hold their JOG dial and listen for "Intercom Pairing."  The LEDs on both headsets will flash RED quickly while trying to pair up.  In a few seconds, the two headsets will find each other.  Now push the JOG dial on ONE headset ONLY.  Wait a few seconds, and you will hear a mild "hiss" on both headsets.  You are now connected and can have your full-duplex conversation.

NOTE: When you are finished using your headsets, they should be turned OFF by pushing and holding the JOG and PHONE buttons together until the voice says "Goodbye," and the LED light goes OFF.  Do this on all My Team Talks headsets in your system.

We would love to hear your feedback. Contact Us Here if you have any questions.